So...there is a cricket in my house.
Which is not really my house, given that I am living in my car.
But that's another story.

The cricket made itself known last night.
(Oh - and if you're wondering, NO! I am not one of those people that keep scary pets that eat live crickets.  There was no chance of escapees in this case. This was a completely random cricketing.)
I was alone in the house trying to eat dinner.  'Chirp!' came the sound, high-pitched and irritating.  I ate a bite of my sandwich, hoping it was a one-time, random chirping.
'Chirp!'
I had to leave the house.

Hours later I returned.
This time I was with Paula.  We'd been in the house mere moments when the cricket made itself known.  I set about making a snack.  Paula, on the other hand, could do NOTHING but seek out the insect.  Against my will, I was drawn into the hunt.  Two hours later, after unplugging the microwave, fridge, stove, modem, smoke detector, doorbell and every other remotely electrical device in our home, we still had not found him.  We opened every bag of grain, flour and carb-product and Paula didn't even stop at the coffee beans.  I turned off my phone.  The cricket went silent.  For a moment.  Paula shot daggers at me with her eyes.
And then, 'chirp'!

Exhausted and emotionally drained, we lay down on the kitchen floor.  For some reason Paula looked up.  She noticed something under the counter.  We got close to it, and heard the offending noise: 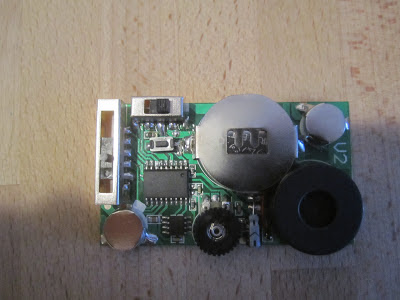 I sighed with relief and said, 'Oh, it's a carbon monoxide detector'. Paula backed away from the thing as though terrified. She said, 'I've never seen that thing before'. And then she did the strangest thing.  She put her mouth close to the small machine and said, 'Chris, are you listening?'  She was clearly convinced that our house had been bugged.  By our own room-mate!  Honestly, who would go so far as to do that?  I told Paula she was crazy. Chris was out of the house at the time.  He's always out of the house.  He's here from Germany doing medical research and the mice in his lab must be tended to every four hours.  He's so often out of the house in fact that he has had to purchase this in order to sleep in his lab:
﻿﻿
Anyway, I digress. Given our difference of opinion on the device, Paula and I figured that it was time to call in expert help. A one am phone call to our favourite instrumentation specialist assured us that we were not likely in immiment danger.  Still, to be safe, we opened all the windows and crawled into bed together (better to die together than alone, I always say).

After a fitful sleep, I stumbled into the kitchen.  I found Chris there making coffee. I regaled him with the cricket episode.  He brought his hand to his face and began to giggle.
'WHAT????????????!!!' I screamed, waking Paula and all the neigbourhood cats. 'It worked exactly like the testimonials said it would,' gasped Chris, now doubled over in the kitchen.  As he wiped tears of laughter from his eyes, he reached under the counter for the offending device.  Tucking it into the box he pulled from his pocket he said, 'Have a nice day!' and headed back to his lab.
﻿﻿﻿

﻿﻿﻿Epilogue:
I giggled all day long.  Something about this premeditated prank by my 26 or 27 year old (he's not sure) self-appointed younger brother makes me feel loved.  (I mean he was thoughtful enough to order the thing online for goodness' sake!)  For Paula two different things have happened.  One:  Chris is now to be known as 'The Annoy-a-Tron'.  And Two: we are busily plotting revenge....
Posted by Little Miss Adventure at 16:39