The Grand Canyon with its unrelenting sun is really no place for a sensitive-skinned redhead.  Yet somehow this past August, our Grand Canyon trip was 19% ginger.  The odds of this are remarkable really, given that redheads account for only 2% of the global population.  More surprising perhaps is that one of us was actually even-tempered (what do you mean it obviously wasn't me?!?)  Most shocking of all is the fact that we were not the three who had to be evacuated from the trip. 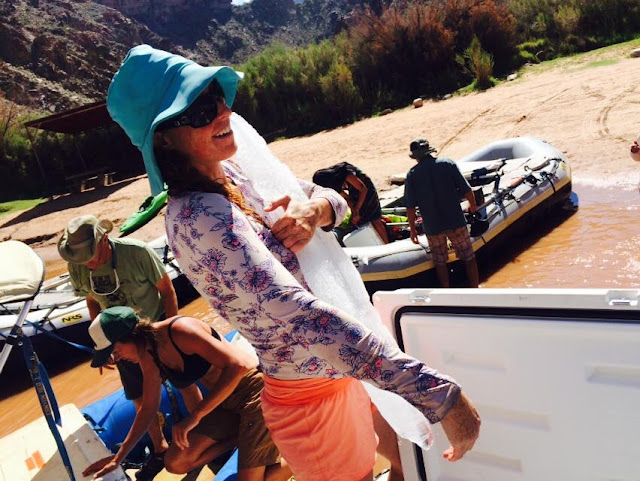 And not only did the three redheads make it to Day 16, so did this ice!

Can you believe it?

But it's only right that we were there.  For one, what's a party without a redhead?  And secondly, we share a name with this river.  'Colorado' is Spanish for red.  I know this because it's one of the many nicknames handed to me in my travels through Latin America alongside 'pecas' (freckles), 'la carpintera' (red-headed woodpecker), 'la peliroja' (the redheaded one) and 'banano' (for the freckles that make me look like an overripe banana).

But this isn't about me.  It's about a river.  And not just any river.  This is about the Colorado. The seventh largest river in the US, the mighty force that carved out the Grand Canyon.


A river that's touched me more deeply than I thought possible.

A river that carries 30,000 people a year on her back as she squeezes through the Grand Canyon.

A river that moved filmmaker and photographer Pete McBride to spend his life fighting for her.
(What better way to spend a life?)

If you love the Grand Canyon, you really must check out his photographs.

It may just be that Pete McBride has best captured the majesty, mystery and modern day misery of his native river.  Being born on this river, Pete tells her story in a way I never could.

His stunning visual love poem to the Colorado speaks for itself.  He's called it I am Red.

Before this trip I loved rivers, mountain people and being outside.  But after a moon in the canyon and my baptism by the grand Colorado, I am again reminded that I don't just love those things.


Posted by Little Miss Adventure at 15:50